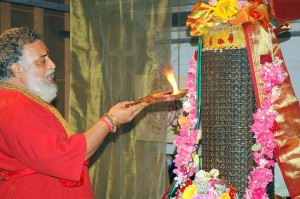 The temple houses a two ton solid Shivalingam with 1008 individual shivalingams inscribed upon it. This is known as a “sahasralingam,” and multiplies Lord Shiva’s power by 1000 times. In addition the lingam is consecrated as Sri Maha Kaleshwar, who is one of the 12 Jyotirlingams, especially sacred manifestations of Lord Shiva in India. This is the first of an eventual twelve Jyotirlingam temples to be established in the United States under the auspices of the Sree Narayanee Kalikambal Foundation.

Sri Maha Kaleshwar, whose original temple is in Ujjain, Madhya Pradesh, India, is known as the Lord of Time. Unlike other Shivalingams, Sri Maha Kaleshwar faces South, the traditional direction of death in Hindu culture. As such he is the Lord who does not turn his face away from suffering, illness, or death, and who is capable of conquering the most difficult of circumstances. Prayers to him for relief of mental and physical suffering are particularly effective. He grants wisdom, peace, and well-being.

Our temple is open to all, without regard to religion, race, caste, or gender, and is dedicated to the service, enlightenment, and upliftment of humanity. Our temple is unique in that devotees are invited to participate fully in worship, including performing abhishekam (bath with sacred substances) of Sri Maha Kaleshwar (see Calendar to the right for dates). Devotees may request and/or sponsor pujas or perform worship themselves, as they prefer. 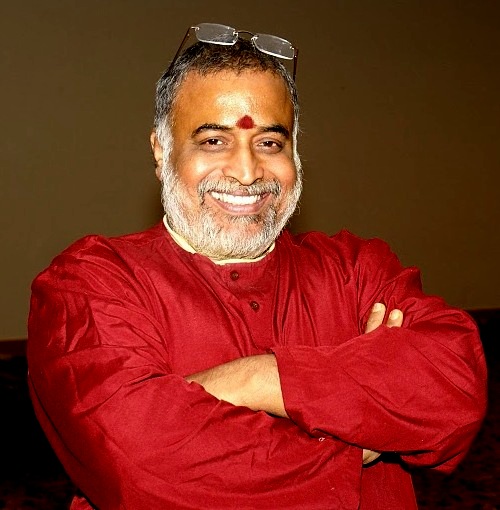 The Sri Maha Kaleshwar Mandir was inaugurated by Swami Sathasivom. The Mandir operates under the auspices of the Sri Sambha Sathashiva Vidya Peetham, a 501(c)3 nonprofit religious corporation.

Swami Sathasivom is the elder son of Sambamurthy Sivachariar, a world-renowned Hindu priest and guru who served as the head priest of the Kalikambal Temple in Chennai, India throughout his life, and who travelled to many countries in the service of world peace. Swami Sathasivom showed a great interest in spirituality from his 9th year, and began acccompanying his father to pujas (religious services) from that time. In 1971, at the age of 12, Swamiji decided to take his first spiritual pilgrimage all alone and far from home, to see the goddess Kali in the city of Kolkata, and to Benares, the holiest city of India. From that time, Swamiji continually travelled across India, meeting and making friends with many saints and sadhus (wandering yogis) and pursuing the depths of spiritual knowledge. He served in the Kalikambal temple from time to time, receiving hundreds of people daily and helping them in their spiritual and material lives with his prayers. But Swamijis great interest in meeting all kinds of people and spreading his spiritual experiences has led him to keep travelling all his life, never restricted to any one place. Swamiji’s spiritual realization is that God dwells in all forms, so he never looked at anyone’s caste, religion, gender, wealth or any other differences, and he never worried about anything, knowing God would take care of all his needs. In this way he remained free from all bondages of the ordinary life, despite being married and having a family. In this way Swamiji can go anywhere at anytime to serve humanity, and all his needs are arranged by Goddess Kalikambal. His wife Renuka and daughter Harsha have helped him faithfully and constantly, enabling him to concentrate all of his energy on giving spiritual service to everyone freely, circling the globe countless times in this effort. Swamiji has spent almost a third of his life in “maunam,” a vow of silence that he has undertaken periodically for long periods of time (up to three years), a practice he began spontaneously as a young schoolboy. During these periods of intense discipline Swamiji prays intensively for world peace and the benefit of humanity.

Swami Sathasivom first received the inspiration to establish Shiva temples in the United States in 1989. In 2007 he began the construction of the first four of an eventual 12 sahasralingams to come to the United States. In the summer of 2010, Swamiji undertook a three month vow to complete 1008 Chandi homams, in support of his vision to establish the jyotirlingam temples in the United States. By performing ten Chandi homas every day for three months Swamiji was able to complete this vow in August of 2010 in Ashland, MA, near Boston. Shortly afterwards Sri Maha Kaleshwar jyotirlingam arrived in La Honda, and the first of the envisioned twelve jyotirlingam temples was established.

If you would like to assist in the planning or sponsorship of our exciting events, please contact us. You may also make a donation in support of these plans at our donate page.

Swami Sathasivom first received the inspiration to establish Shiva temples in the United States in 1989. In 2007 he began the construction of the first four of an eventual 12 sahasra jyotirlingams to come to the United States. In 2010 Swamiji undertook a three month vow to complete 1008 Chandi homams, in support of his vision to establish the jyotirlingam temples in the United States. By performing ten Chandi homas every day for three months Swamiji was able to complete this vow in August of 2010 in Ashland, MA, near Boston. Shortly afterwards Sri Maha Kaleshwar jyotirlingam arrived in La Honda, and the first of the envisioned twelve jyotirlingam temples was established.

The twelve Jyotirlingams, or “lingams of light,” are special manifestations of Lord Shiva that appear to the higher mind as infinite columns of light penetrating through the earth and into the cosmos. These consecrated murtis of Lord Shiva concentrate and radiate his enormous power with great force. By sculpting the Jyotirlingams for the United States as “sahasralingams,” with 1008 individual Shivalingams inscribed into the surface of the overall lingam, this enormous power is multiplied a thousand fold.

This project is the culmination of the life’s work of Swami Sathasivom. The Sree Narayanee Kalikambal Sathasivom Foundation has been established to bring this vision to reality. If you would like to support the mission of the Jyotiringam Project, please write to info@srimahakalmandir.org. Your donation at our Donate page

will directly support the work of the Foundation (please indicate that you are donating in support of the Jyotirlingam Project when donating).